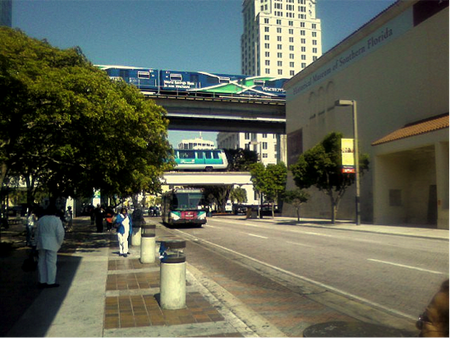 Metrobus from 1960 to present source : http://www.miamidade.gov/transit/history.asp
Miami-Dade County, Florida, where the city of Miami belongs, operates Miami-Dade Transit ( MDT) system that runs county-wide. It is the fifteenth largest public transit system in the USA and the largest transit agency in the state of Florida. Since Miami-Dade county, then Dade county, passed an ordinance to create the Metropolitan Transit Authority, MTA in 1960, MDT has evolved into a four-mode transportation system consisting of metrobus, metrorail, metromover, and Special Transportation Services for people with disabilities.  MDT serves over 353,000, which is approximately 10% of citizens of Miami-Dade County on a daily basis with the mission to “meet the needs of the public for the highest quality transit service: safe, reliable, efficient and counterous". [1] 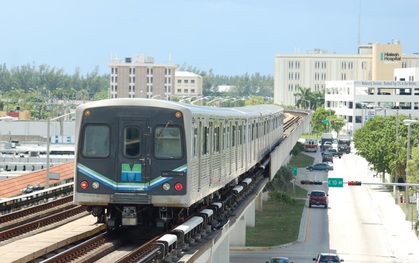 In the late the 1970s,  the Metrorail system officially began its service with 17 stations. Unlike the Metrobus sytem, the Metrorail system travels only 25 miles on an elevated, double tracks. Currently, there are two lines, orange and green, with 136 train cars in use that primarily travels in the central part of the county along to the coast. The Orange line starts at Miami International airport (MIA), while the green line has its first station in Miami Springs. The two lines eventually emerges together and run down vertically and pass by Downtown Miami, Little Havana, Coral Gables, Coconut Grove, and South Miami.  The 23 Metrorail stations are about one mile apart and intersect with metrobuses, which interestingly runhorizontally below MIA, while vertically above it for the purpose of transfering people to intersecting metrorail stations. [1] 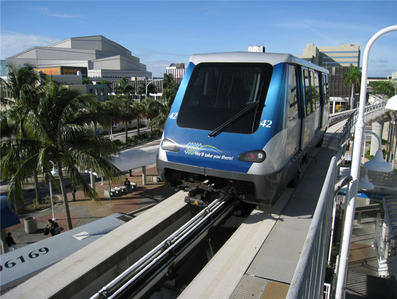 A picture of Metromover source : ww.my-miami-beach.de/public-transportation-miami/

In addition to the two transportation modes above, the Metro-Dade Transportation Administration contracted Inc. of Framingham, Massachusetts to build the 1.9 miles guideway for Metromover in 1983. Today, electrically powered and fully automated, the Metromover system runs on 4.4-mile tracks and mainly serves traffic in the downtown central business district of Miami.  [1]

Although MDT system has gone through many changes over decades and served the county and the city of Miami successfully, it is very likely that it will need to undergo a lot of changes as Miami 21 progresses. Miami 21 is Miami’s most recent urban planning project based on New Urbanism and FBC, Form-Base codes that emphasizes on walkable, neighborhood-based development. [2] One of the reasons that the current MDT system would not be able to uphold this project is that the majority of the infrastructure built in the city has been built solely for transport system, ignoring the safety of and need for pedestrians and its harmony with the surrounding area. For instance, the site of Brickell Metrorail Station has suffered from lack of energy and pedestrians despite its convenient location in downtown Miami, one of Miami-Dade County’s major centers of office and residential development. This is mainly because the surrounding area of the station was not designed to promote any commercial growth; there are no retail stores or service shops at the ground level. In addition, the station does not visually blend with surrounding neighborhoods and the elevated tracks of metrorails create shadows and visual barriers for pedestrians below. If a station in downtown Miami, one of the most populated area in Florida, has trouble attracting and accomodating people, there is no question that there need to be a change in the design of metro stations to become a more lively, pedestrian-friendly, commercially growing sites as Miami 21 promises. [3]