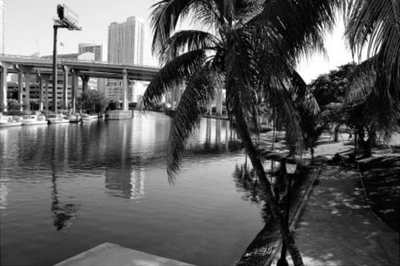 Figure 2: Jose Marti Park, 2008
However as political heat increased, population aged, and influx of the immigration of Cuba’s unskilled workers heightened, the deterioration of the neighborhood was being more apparent. According to a 1986 study of residents in Little Havana by Florida International University, about two-thirds of the population over sixty earned less than $7,000 annually. In 1980’s, with low rents and high crime rates, the neighborhood continued to decline. City leaders felt the need to take over, and they did so by creating a task force that would aimed to revive twenty-one blocks of East Little Havana and control the damage to the rest of Little Havana.

In 1984, the Miami City Commission approved a plan to turn sixty square blocks of Little Havana into a tourist destination: Latin Quarter. The Quarter was divided in to three separate zoning districts. Each district had residential and commercial uses. The Quarter aimed to preserve Little Havana that is the central hub of exile community in Miami. The establishment of Latin Quarter divided Little Havana into two groups: supporters and resistors. This plan resulted in the construction of better sidewalks, painting facades, repavement of the streets, building of the Latin Quarter Specialty Center, and construction of Jose Marti Park (See Figure 2). [1]